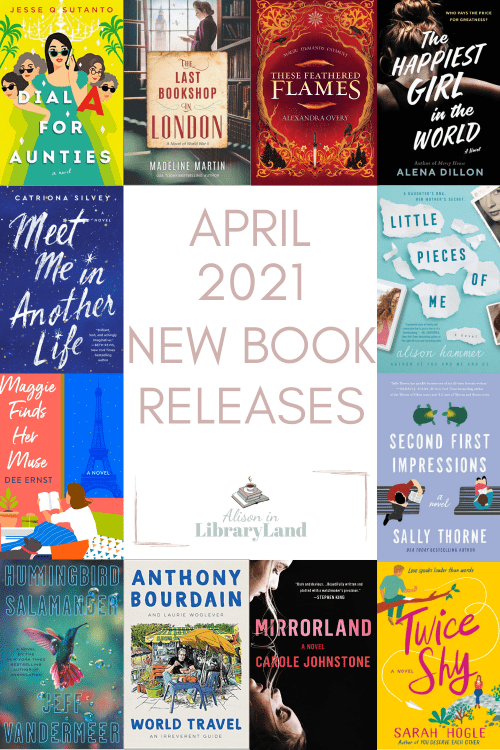 April is a weird month with one foot in spring and the other still wearing a snow boot…it means even though I’m ready to take my reading outside I’m gonna need like 3 extra layers to be cozy. Or just move back to Vegas lol. I just want to read all of these books with the sun & fresh air as partners!

&& if you don’t feel like waiting for these April 2021 New Book Releases, be sure to check out the February and March releases.

by Jeff VanderMeer
bookshop.org // Kindle // Audiobook
One day, security consultant ‘Jane Smith’ receives an envelope and a key that changes her life. Led to a storage unit with a taxidermied hummingbird and clues for more, Jane finds herself racing to save her family and figure out why Silvina, a dead ecoterrorist, sent her that letter. Is the only way to safety for her and the entire world following in Silvina’s footsteps?
For Fans Of: Conspiracy thrillers and Climate Change Science

The Last Bookshop in London

by Madeline Martin
bookshop.org // Kindle // Audiobook
When Grace moved to London, blackouts and bunkers were not what she expected. But it’s 1939 and everyone is preparing for war as Hitler marches across Europe. A job in an old bookshop helps Grace settle in her new home. As air raids and life intensify, the power of storytelling unites her community through even the darkest nights of war.
For Fans Of: WW2 Historical Fiction and The Book of Lost Names

by Sarah Hogle
bookshop.org // Kindle // Audiobook
Maybell has always been a dreamer, living in her own world is much better than the real one, so when she inherits a house in the Smokies it’s a perfect chance to escape. Except, the house is falling apart and everything has to be shared with the groundskeeper who is as grouchy as he is gorgeous. With different visions of the future for the property will Maybell and Wesley be able to let their guards down and fix more than just the house.
For Fans Of: The Hating Game and Enemies-To-Lovers

by Erik Hoel
bookshop.org // Kindle
Ending up homeless after self-destructing when he was a rising star in the neuroscience world, Kierk vows to do better when offered a prestigious new job. This time though instead of focusing on his job he starts to lose himself investigating the suspicious death of a colleague. But as his search brings him closer to a co-worker, it also brings him closer to the sense that something much more sinister is going on around them.
For Fans Of: Sci-Fi and Blake Crouch

by Tirzah Price
bookshop.org // Kindle // Audiobook
A Pride and prejudice retelling: Lizzie, a 17 year old aspiring lawyer, sees a scandalous murder in high-society London as a chance to prover herself. But Mr. Fitzwilliam Darcy, the heir to a prestigious firm, won’t stop interfering. As feelings and the case become more complicated, Lizzie discovers her dream job might be more dangerous than anticipated.
For Fans Of: Jane Austen and Lady Janies

by Joshilyn Jackson
bookshop.org // Kindle // Audiobook
After growing up poor with a single mother constantly warning her about the world being a dark and scary place, adult Bree thinks she has it figured out after marrying into a powerful family and having three kids, two teenagers and one new baby boy. Then one morning she sees a witch peering into her window and by the end of the day her baby boy has vanished. Given one small task to do to get her baby back Bree easily agrees, but that action has enormous consequences and now Bree is in a tangled web that could destroy everything she loves.
For Fans Of: Family Thrillers and A.J. Flynn

Between the Bliss and Me

by Lizzy Mason
bookshop.org // Kindle // Audiobook
Attending NYU is a chance for freedom for 18 year old Sydney Holman, but her overprotective mom is devastated. Jumping into her new life Sydney learns a life-changing secret- her dad, a drug addict who left when she was very young, is homeless on the streets of New York following a schizophrenia diagnosis. She seizes this chance to get to know him, and know what her own future may hold with this disease.
For Fans Of: Contemporary YA and Mental Health

by Sally Thorne
bookshop.org // Kindle // Paperback // Audiobook
Ruth has spent the first 6 years of her adult life working at a front desk of a luxury retirement villa, giving it her all and losing herself in the process. Teddy has spent years partying and not taking anything seriously much to the chagrin of his father who viewed him as his successor. When Teddy needs a place to stay his dad sees his chance and gives him a cottage at one of his business, the retirement home. Two of the most eccentric residents have once again placed an add for a personal assistant so Ruth partners them up and both sides may have finally met their match.
For Fans Of: Contemporary Romance and Emily Henry

Little Pieces of Me

by Alison Hammer
bookshop.org // Kindle // Audiobook
Paige is grieving her dad and trying to come to terms with always feeling like the odd one out from her family, especially her mom. Then she gets an email from a DNA testing wesbite that might explain everything while also changing everything she thought she knew about her life. Turns out her dad wasn’t really her dad. Paige’s mom was a sophomore in college back in 1975, and after disappointment from her sweet but boring boyfriend she decides to stop playing it safe. But a night with the golden boy on campus has devastating consequences and she’ll do anything to build a stable life for her unborn child.
For Fans Of: Catherine Ryan Hyde and Women’s Fiction

When the Stars Go Dark

by Paula McLain
bookshop.org // Kindle // Audiobook
Anna Hart is a missing persons detective in San Francisco. With personal knowledge of the dark side of human nature she reaches a breaking point. Anna flees to the Northern California village she grew up in with foster parents. But when she arrives there’s a local girl just gone missing, something too familiar to an unsolved case during her childhood. That case shaped her entire life and now she must use all of the insights learned as past and present collide.
For Fans Of: Brianna Labuskes and Lisa Gardner

by Dee Ernst
bookshop.org // Kindle // Audiobook
In a last ditch effort to get past her writer’s block, Maggie heads to Paris. Newly single at 48 years old, all she needs to do is write. Just Finish the manuscript for the third book in her trilogy. The city doesn’t turn out to be the escape she hoped for though between a naked man appearing in her bathtub and her ex-husband deciding it’s the perfect time to vacation in France. With time running out Maggie needs the inspiration and sophistication of Paris to find the confidence she’s lost.
For Fans Of: Contemporary Romance and Mary Kay Andrews

The Happiest Girl in the World

by Alena Dillon
My Rating: ⭐⭐
bookshop.org // Kindle // Audiobook
Sera Wheeler has dedicated every moment of her life to her Olympic dream. As a gymnast that means training 30 hours a week, an unending supply of painkillers, and every resource her family has to make this dream come true. When her best friend reports the team doctor to the Olympic committee, the people who will pick the final team, Sera denies what she knows to not lose favor. As practice and pain ramp up getting closer to the big event Sera finds herself not training for love of the sport anymore but to make that disloyalty worth it.
For Fans Of: Megan Abbott and Elissa R. Sloan

by Anthony Bourdain
bookshop.org // Kindle // Audiobook
Anthony Bourdain spent his life travelling the world. He had stories and anecdotes about more places than most people could ever dream of. World Travel combines travel guides with essays from friends and family to dive deeper into the stories about certain places and what it was truly like to travel with Anthony Bourdain.
For Fans Of: Travel and Non-Fiction

by Alexandra Overy
bookshop.org // Kindle // Audiobook
When twins are born in Tourin, heirs to the throne, they’re separated to be raised according to what fate has planned. One to be a future queen, the other to train with her aunt to become the Firebird. But before her training is complete someting changes and it can only mean the queen is dead. It is time for a new ruler. The princesses must quickly figure out their new roles and in doing so discover who they can trust, and who killed their mother.
For Fans Of: YA Fantasy and LGBT

by Carole Johnstone
bookshop.org // Kindle // Audiobook
Growing up, twin sisters Cat and El invented Mirrorland, a dark imaginary place under the stairs of their home. While El stayed behind and eventually moved into that home with her husband, Cat fled to Los Angeles and never looked back. But when El goes missing, Cat must return home. As she finds clues in nearly every shadowed corner of the house the secrets and ghosts from her past all lead back to one thing, Mirrorland.
For Fans Of: Ruth Ware and Gillian Flynn

by Laurie Frankel
bookshop.org // Kindle // Audiobook
The Mitchell triplets are beloved in the small town of Bourne. Mirabel may not speak but she’s the smartest person any of them know. Monday has become a personal library, able to find the perfect book for any and everyone. Mab has one job which is to get into college and out of Bourne. Their mom has spent their whole lives fighting for justice 17 years after Bourne was national news when their water turned green and hazardous. Just when it seems like nothing will ever change a mysterious family moves in, the first new family in years, with new people but old secrets.
For Fans Of: Literary Fiction and Taylor Jenkins Reid

Meet Me in Another Life

by Catriona Silvey
bookshop.org // Kindle // Audiobook
When Thora and Santi first meet it’s an immediate bond. They both have the same humor, same intelligence as students living abroad, and same desire to look up. After only a few days Santi is killed and Thora is left devastated. But they’re going to meet again, and again, in a love story spanning realities.
For Fans Of: Life After Life and The Time Traveler’s Wife

Dial A for Aunties

by Jesse Q. Sutanto
bookshop.org // Kindle // Audiobook
Meddelin accidentally kills her blind date. Luckily her mother calls in her meddlesome aunties to help get rid of the body. But it’s actually a lot harder than anyone thought and not made easier when they ship it to the wedding of a billionaire that the whole family will be working. It’s the biggest job yet for the family wedding business and not even a corpse can get in the way of making sure it all goes perfect. Except the appearance of Meddy’s greatest college love, and biggest heartbreak, just might.
For Fans Of: Crazy Rich Asians and Chick Lit Thriller 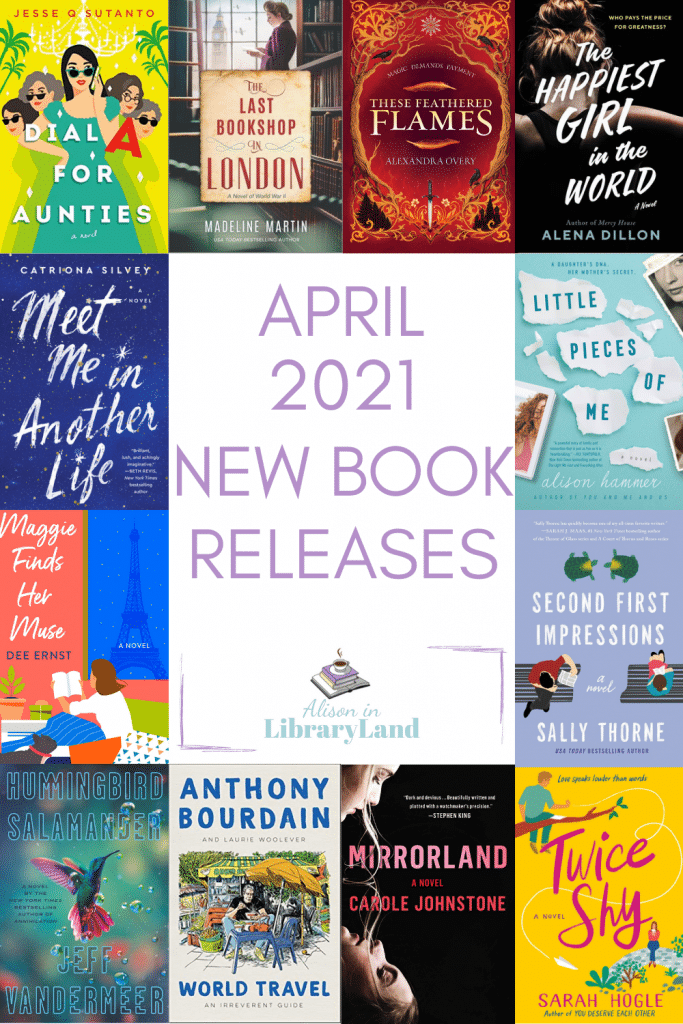