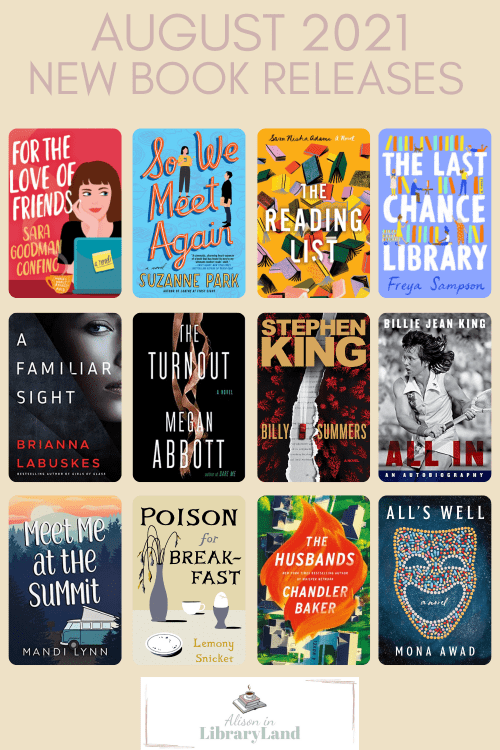 Megan Abbott, Stephen King, Lemony Snicket….this is a GREAT month for big time releases. I genuinely don’t think I could pick just one that I’m most excited for. It almost, almost, makes me wish for cooler weather to spend days tucked inside binging book after book.

I’m also incredibly excited for Billie Jean King’s autobiography. With the Olympics this summer were going to be flooded with reminders of how many incredible female athlete’s there are. But that also means remember the ones that came first and fought for women’s rights and attention in the sports world.

And as always if you don’t feel like waiting for these books to be released, check out previous 2021 releases!
April.
May.
June.
July.

For The Love Of Friends

by Sara Goodman Confino
My Rating: ⭐⭐⭐⭐
I received an Advanced Readers Copy of this book through Netgalley. See my review here!
bookshop.org // Kindle // Audiobook
When Lily ends up as a bridesmaid in five weddings in six weeks she isn’t sure how she’ll survive it. Her job at a science foundation isn’t really using her creative writing talents so she decides to start Bridesmania, a blog about trying to survive mom-zilla’s, bachelorette parties, Spanx, and more dress fitting’s than you can imagine. But when the blog gains popularity will she be able to keep it anonymous and get her couples to their happily ever after.
For Fans Of: Contemporary Rom-Com’s, Christina Lauren

by Brianna Labuskes
My Rating: ⭐⭐⭐⭐⭐
I received an Advanced Readers Copy of this book through Netgalley. See my review here!
bookshop.org // Kindle // Audiobook
Dr. Gretchen White is a specialist in violent crime and personality disorders, which is not surprising since she’s a sociopath once accused of killing her aunt. Detective Patrick still thinks she did it, but for now he’s fine keeping her close and having her help on cases.  When a teenager, Viola, is accused of killing her mother and showing no remorse about it, Gretchen is called in. Stories of Viola’s manipulation and cruel horrors make the case seem open and shut but that’s what they said about Gretchen as well, and she was innocent.
For Fans Of: The Silent Patient, Psychological Thrillers
**personal note** I first read this back in January and since then the title has been updated to include “Gretchen White #1” which ~fingers crossed~ means it’s the start of a series.**

by Megan Abbott
bookshop.org // Kindle // Audiobook
Dara and Marie were trained from birth by their mother to be ballet dancers, and now they run their parents studio along with Charlie, Dara’s husband. They’ve perfected their own dance around the three of them that keeps the studio going. But when an accident occurs shortly before the annual performance of The Nutcracker, the usual season of anxiety and competition is threatened even more by a new addition.
For Fans Of: Sara Shepard, Black Swan

by Mona Awad
My Rating: ⭐⭐⭐
bookshop.org // Kindle // Audiobook
Miranda’s life has been a nightmare ever since an accident took away her acting career and left her with chronic back pain, a failed marriage, and a growing reliance on painkillers. She’s determined to stage a performance of All’s Well That Ends Well to save her career as a college theater director but her students want Macbeth and are ready to fight for it. When a trio of benefactors appear, offering her a chance to stage her show while putting her students in their place and making her invisible pain known, it’s a promise she can’t turn down.
For Fans Of: Margaret Atwood, If We Were Villains

by Stephen King
bookshop.org // Kindle // Audiobook
Billy Summers is the best in the business when you need to hire a killer, as long as the target is truly a very bad guy. He’s ready to be done though, after one last job and a career of being a Houdini after a job is done should be enough. What could go wrong?
For Fans Of: Horror, Crime Thrillers

So We Meet Again

by Suzanne Park
bookshop.org // Kindle // Audiobook
Jess Kim is an up-and-coming investment banker. When she’s passed over for a promotion, laid off via virtual meeting, and overhears why-the racism and misogyny should be surprising but isn’t-she storms out and moves back home. Her domineering Korean mom is determined to set her up with the pastor’s son, Daniel only he’s not the awkward kid she remembers. Now he’s a lawyer by day and video game streamer at night which is perfect because Jess is going to start a Korean cooking YouTube channel.

When her mom walks in mid-show one day, to tell her everything she’s doing wrong, it goes right and they go viral. Jess’ channel turns into a brand and soon she’s on the other side of the table from the investment firm she quit, the one Daniel is the new counsel for.
For Fans Of: Contemporary Fiction, Emily Henry

I Mean You No Harm

by Beth Castrodale
bookshop.org // Kindle // Audiobook
For most of her life Layla has been estranged from her career criminal father, Vic. When he dies, he leaves behind a tempting inheritance of questionably gained money. She’s urged to take it by Vic’s other daughter, Bette. The two girls have a troubled past but a road trip begins to mend those fences. That is until Layla finds herself in the middle of an unsettled score between her father and a man who knows more than he should about her mother’s mysterious death.
For Fans Of: Mystery Thrillers, Lisa Gardner

by Chandler Baker
bookshop.org // Kindle // Audiobook
Nora is a successful attorney, her and her husband have great careers, but she seems to have to work just as hard at home as well in ways he never thinks of. When they go house hunting in the exclusive Dynasty Ranch neighborhood Nora is in awe of of the high-powered women. The air is different, the husbands enviably supportive, and the women are thriving more than just surviving. Nora agrees to help one of the residents with a case but as she’s pulled into their lives she discovers the secret to having it all, and it’s worth killing for.
For Fans Of: Stepford Wives, Feminist Thrillers

by Sara Nisha Adams
bookshop.org // Kindle // Audiobook
When Mukesh loses his wife his quiet life is ruled by routine. Go to temple, the shops every Wednesday, and worry about his bookworm granddaughter, Priya, who hides in her room reading every evening. Aleisha is working at a library for the summer when one day she finds a list of novels in the back of a copy of To Kill a Mockingbird. She’s never heard of the books before so she decides to check them out one by one.

Mukesh heads to the library desperate to find a way to connect to his granddaughter so Aleisha passes along the reading list. The books transport them away from the painful realities of their lives. They begin a friendship, a connection, of lonely souls trying to escape grief and find joy in the real world again.
For Fans Of: Books about Books, Contemporary Fiction

by Avery Bishop
bookshop.org // Kindle // Audiobook
When Jessica’s 17 year old daughter goes missing the only the police will do is say ‘sometimes teenagers run away’. When weeks turn into months she begins to fear she’ll never see her daughter again. Until, one year later, she gets a series of text messages: mom. please help. i think he’s going to kill me. But they also come with a warning, Jessica can’t go to the police because her daughter’s kidnapper wears a badge.
For Fans Of: Mystery Thrillers, B.A. Paris

by Isabella Maldonado
My Rating: ⭐⭐⭐
bookshop.org // Kindle // Audiobook
When a family is murdered while they sleep, FBI agent Nina Guerrera is sent with her new team to determine if it has to do with a previous attack four years earlier. What they uncover is a serial killer that’s been running undetected for nearly three decades. Every crime scene reminds Nina of La Llorona, a Latin folktale that haunted her as a child. She must figure out the meaning behind these rituals even if it brings her closer to her past than she could have ever imagined.
For Fans Of: Crime Thrillers, Andrew Mayne
The first book is being made into a Netflix series. Jennifer Lopez is currently attached to star and produce.

All In: An Autobiography

by Billie Jean King
bookshop.org // Kindle // Audiobook
The life of female tennis player Billie Jean King. From telling her mom at 7 years old that she was going to do something great with her life, to publicly coming out at age 51. Plus everything in between about being one of the greatest female tennis players of all time and what it took to survive everything that came with it.
For Fans Of: Sports Biographies, LGBTQ+ Female Athletes

by Lemony Snicket
bookshop.org // Kindle // Audiobook
“This true story—as true as Lemony Snicket himself—begins with a puzzling note under his door: You had poison for breakfast. Following a winding trail of clues to solve the mystery of his own demise, Snicket takes us on a thought-provoking tour of his predilections: the proper way to prepare an egg, a perplexing idea called “tzimtzum,” the sublime pleasure of swimming in open water, and much else.”
For Fans Of: Childrens, YA

by Freya Sampson
bookshop.org // Kindle // Audiobook
June Jones has always preferred to be surrounded by books rather than people which is why she never left the village she grew up in. Her library is the heart of the community and full of memories of her mother. When it’s threatened to be closed June will have to open up to the people around her because this time she’s not going down without a fight.
For Fans Of: Chick Lit Romance, Lyssa Kay Adams

Meet Me at the Summit

by Mandi Lynn
Kindle
After losing both parents in a car accident, the last thing 19 year old Marly wants to do is a cross-country road trip. Family & friends finally talk her into taking her mom’s renovated VW bus where she’s forced to face her grief. Marly also starts trying out the life her parents knew she always dreamed of. Things like hiking, photography, and exploring a world that pushes her beyond the walls she built to protect herself.
For Fans Of: YA, Cheryl Strayed 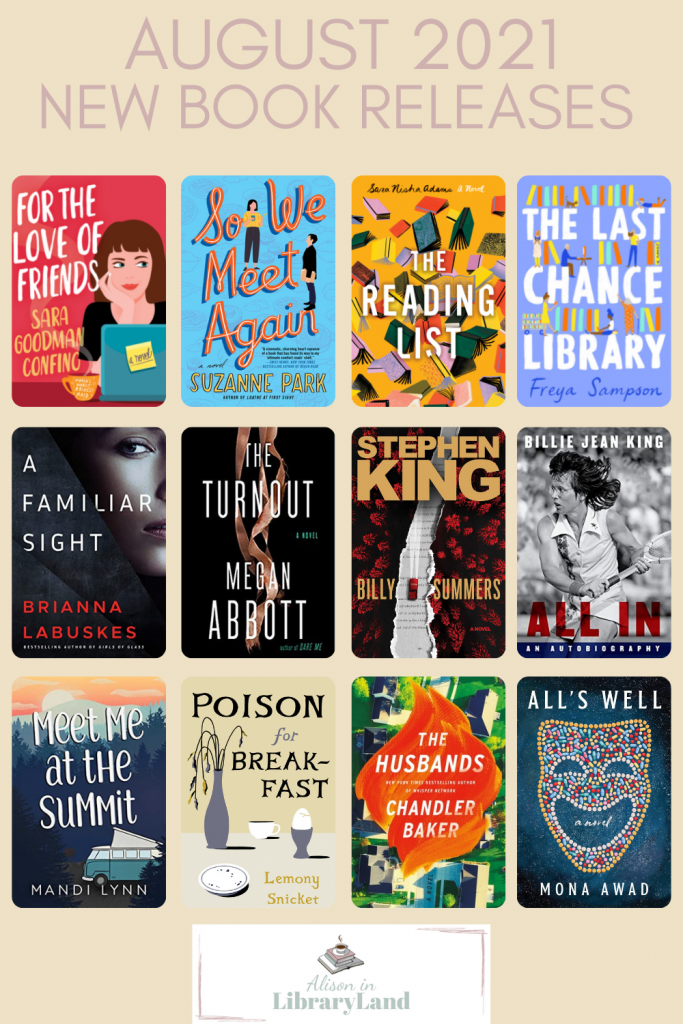 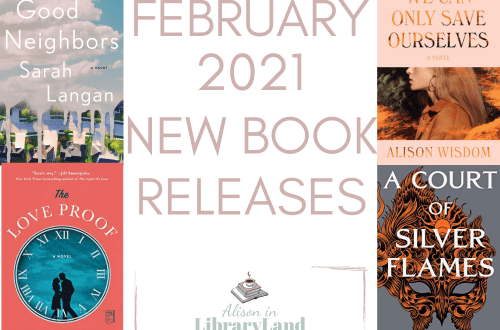 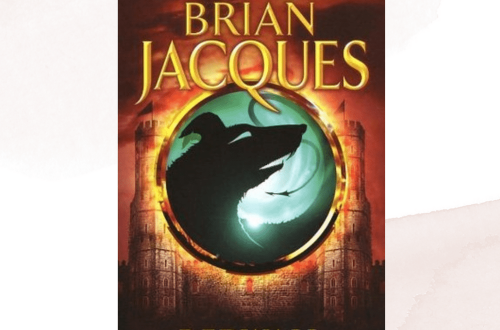