While the Beneath A Scarlet Sky adaptation has lots of interest, it does not seem to be happening any time soon. With hundreds of thousands of sales, and a big name attached to the announcement of a feature film it looked like this was going to be a big project. But no updates for quite some time now means this story won’t be on screen for the foreseeable future.
World War II stories are timeless though, so there’s no reason to believe this movie won’t be picked up at some point. It may be with a different studio and lead though.

Based on the true story of a forgotten hero, Beneath a Scarlet Sky is the triumphant, epic tale of one young man’s incredible courage and resilience during one of history’s darkest hours.

Pino Lella wants nothing to do with the war or the Nazis. He’s a normal Italian teenager—obsessed with music, food, and girls—but his days of innocence are numbered. When his family home in Milan is destroyed by Allied bombs, Pino joins an underground railroad helping Jews escape over the Alps, and falls for Anna, a beautiful widow six years his senior.
In an attempt to protect him, Pino’s parents force him to enlist as a German soldier—a move they think will keep him out of combat. But after Pino is injured, he is recruited at the tender age of eighteen to become the personal driver for Adolf Hitler’s left hand in Italy, General Hans Leyers, one of the Third Reich’s most mysterious and powerful commanders.

Now, with the opportunity to spy for the Allies inside the German High Command, Pino endures the horrors of the war and the Nazi occupation by fighting in secret, his courage bolstered by his love for Anna and for the life he dreams they will one day share.

The movie is in the early stages of development, although after years of no updates it’s likely the Beneath A Scarlet Sky adaptation has ended up in a ‘development hell’ status.

Beneath A Scarlet Sky Adaptation Timeline:

The book was first published in May 2017. A few months later in August it was announced that Amy Pascal and her production company had purchased the film rights and that Tom Holland was attached to the lead role. There has been no news or updates since then.

Pascal Pictures optioned the rights in 2017.

When the project was first announced, Tom Holland was attached as the lead with Amy Pascal producing.

Because this project is still in the early stages of development there are no filming locations yet. 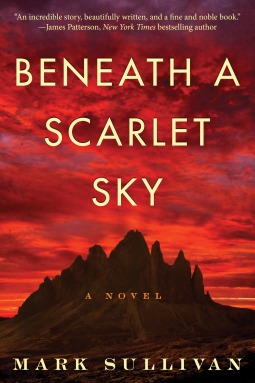 This is currently the only Mark T. Sullivan novel with the screen rights optioned.

Beneath A Scarlet Sky Adaptation: Everything We Know So Far

Hi there! I’m Alison in Libraryland, and I’ll be here for all your book related needs. Many of you know me as the girl with the book recommendations. Don’t be shy! Ask me! If you’re looking for a good book or movie adaptation, let me help you find it. I’ll be here for all your literary needs. This is a book blog run on an obsession for shiny new books, worn-through old classics, and all attempts at moving those stories to the screen, just like this Beneath A Scarlet Sky adaptation!