This Gonzo Girl adaptation may not have a lot of press around it yet, but it has the story and potential to be big. The book is fictional, but the idea behind it was inspired by the author’s real life experience of being Hunter S. Thompson’s assistant. Thompson founded the ‘gonzo’ journalism movement which is where the title of the book comes from and where the basis of the crazy and almost unbelievable story comes from.

About The Book:
Alley Russo is a recent college grad desperately trying to make it in the grueling world of New York publishing, but like so many who have come before her, she has no connections and has settled for an unpaid magazine internship while slinging drinks on Bleecker Street just to make ends meet. That’s when she hears the infamous Walker Reade is looking for an assistant to replace the eight others who have recently quit. Hungry for a chance to get her manuscript onto the desk of an experienced editor, Alley jumps at the opportunity to help Reade finish his latest novel.

After surviving an absurd three-day trial period involving a .44 magnum, purple-pyramid acid, violent verbal outbursts, brushes with fame and the law, a bevy of peacocks, and a whole lot of cocaine, Alley is invited to stay at the compound where Reade works. For months Alley attempts to coax the novel out of Walker page-by-page, all while battling his endless procrastination, vampiric schedule, Herculean substance abuse, mounting debt, and casual gunplay. But as the job begins to take a toll on her psyche, Alley realizes she’s alone in the Colorado Rockies at the mercy of a drug-addicted literary icon who may never produce another novel and her fate may already be sealed.

Current Production Status:
Post-production as of Fall 2022 according to IMDB.

Gonzo Girl Adaptation Timeline:
The book was first published in July 2015. It was reported in March 2017 that a Gonzo Girl adaptation was being made with Olivia Cooke set to star. But this project got stuck in development hell.
In July 2022 it was announced that a film adaptation was back in the works. The same producers were still attached but Cooke was not. Part of the announcement included that Patricia Arquette would be making her directorial debut. Filming began that same month and is expected to last through the summer.

The project’s status has changed to post-production on IMDB as of Fall 2022.

Who Owns The Rights:
The project is being produced by Rh Negative Entertainment and Catch & Release Films. There are no distribution rights attached yet.

Who Is Attached:
Patricia Arquette is making her directorial debut, she also has a role in the film.
Other cast includes: Willem Dafoe, Camila Morrone, James Urbaniak, and Ray Nicholson.

Filming Locations:
The project is currently in production in Park City, Utah. 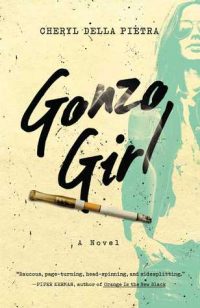 There is no public estimated date but based on it’s filming dates of summer 2022, a 2023 release could be expected.

Other Adaptations From This Author:
Gonzo Girl is currently the authors first and only book!

Gonzo Girl Adaptation: Everything We Know So Far

Hi there! I’m Alison in Libraryland, and I’ll be here for all your book related needs. Many of you know me as the girl with the book recommendations. Don’t be shy! Ask me! If you’re looking for a good book or movie adaptation, let me help you find it. I’ll be here for all your literary needs. This is a book blog run on an obsession for shiny new books, worn-through old classics, and all attempts at moving those stories to the screen, just like this Gonzo Girl adaptation.