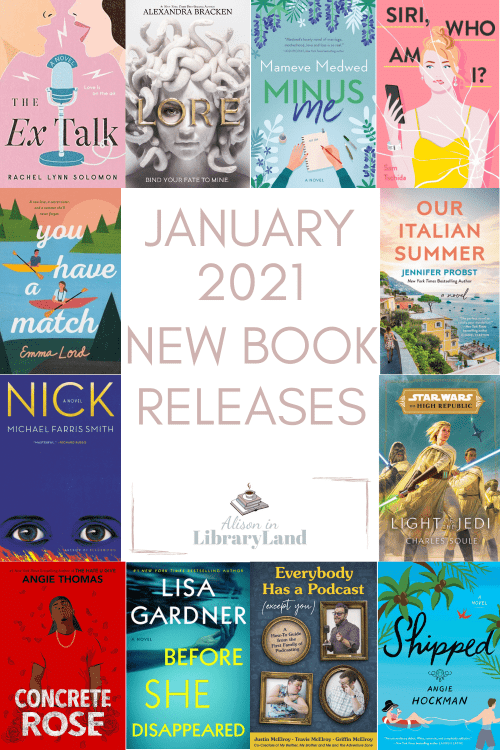 It’s the start of a new year, FINALLY, and the January 2021 new book releases are very very good. We’re all still stuck inside for a while, and the weather outside is definitely frightful, so settle in with these great new reads!
I tried to make sure to get a mix of genres, as well as a mix of the top popular releases and some smaller indies that also sound interesting. When you start off with a book described as ‘Hunger Games meets Greek Mythology’, you know it’s a good month.
2021 also releases The Great Gatsby into public domain so we’ve got a book in this list that is just the beginning of all the interpretations and explorations of Nick Carraway and Jay Gatsby.

by Alexandra Bracken
bookshop.org // Kindle // Audiobook
As punishment for a past rebellion, every 7 years nine Greek gods become mortal and are hunted in the hopes of gaining their power. Lore Perseous left that world after her family was murdered during a hunt. With the next hunt coming up a childhood friend, Castor, and an original god, Athena, find and ask for her help. In exchange for a way out of the ‘Agon’ for good, Lore must survive the rise of a new god with enough power to take down humanity.
For Fans Of: Madeline Miller, The Hunger Games

by Rachel Hawkins
bookshop.org // Kindle // Audiobook
Jane flees Arizona to end up in Alabama. She becomes a dog-walker in an exclusive gated community, watching the stepford-like lives of the families who live there, until she meets a recently widowed resident, Eddie Rochester. As they quickly fall together Jane must deal with the haunting of her past trying to catch up to her, and what happened to the former Mrs. Rochester.
For Fans Of: Jane Eyre, Modern Gothic Thrillers

by Michael Farris Smith
bookshop.org // Kindle // Audiobook
Who was Nick Carraway before he moved into West Egg and met Jay Gatsby?
World War I is over but the scars it left are just beginning. Before going home and dealing with the fall out of the war, what if Nick decided to take a transcontinental trip in the hopes of self-discovery and redemption.
For Fans Of: The Great Gatsby

Star Wars: Light of the Jedi

by Charles Soule
bookshop.org // Kindle // Audiobook
Hundreds of years before the events of the Star Wars prequel movies, in the era of the glorious High Republic, the Jedi are at the height of their power. When a hyperspace catastrophe threatens an entire system the Jedi race to help and must trust the force as they’re pushed to their limits. Something sinister is growing beyond the boundary and there may be more darkness than the Jedi could suspect.
For Fans Of: Sci-Fi, Star Wars, The Mandalorian

by Mameve Medwed
bookshop.org // Kindle // Audiobook
Annie and Sam are childhood sweethearts with a sweet marriage and a gourmet sandwich shop. When a grim diagnosis comes for Annie, she decided to write a manual for Sam to be able to go on without her. Plans for the future of the shop and Sam’s heart are going just fine until Annie’s diva mom shows up with her own wave of chaos and disruption.
For Fans Of: Elinor Lipman, Contemporary Fiction

Concrete Rose (The Hate U Give #0)

by Angie Thomas
bookshop.org // Kindle // Audiobook
17 years before the events of The Hate U Give, Maverick Carter is a 17 year-old in the same Garden Heights Neighborhood.
The son of a gang legend, Mav knows what his life is going to be-dealing drugs to help out his mom while his dad is in prison. Then he finds out he has a baby who’s going to need him for everything. When offered a chance to go straight, Mav finds out walking away from the King Lords won’t be easy or safe, but he’ll find out what it takes to be a man and a father.
For Fans Of: The Hate U Give, Dear Martin

by Sam Tschida
bookshop.org // Kindle // Audiobook
Mia wakes up from a coma with amnesia and her iPhone. Siri reminds her what her name is, Instagram and Uber get her to the place she calls home in posts. There she meets Max the house-sitter for billionaire JP and a few texts seemingly confirm she’s in love and living the good life with JP. But as Max and Mia use her phone to try to recover the memories lost, Mia learns the truth about her Insta perfect life and maybe not-so-accident head wound.
For Fans Of: Such A Fun Age, The Bright Side of Going Dark

by Jennifer Probst
bookshop.org // Kindle // Audiobook
Francesca is fiercely independent and successful, in every part of her life except for family. When her daughter is arrested for possession Francesca finally relents to the trip her own mother has always wanted to take. A summer tracing their family roots is what Sophia has always wanted but now she knows this trip is needed. From Rome to Tuscany to Assisi, this is the chance to remind her daughter and granddaughter that family can always lean on each other.
For Fans Of: Mother/Daughter stories, Travel Fiction

by Emma Rous
bookshop.org // Kindle // Audiobook
1988. When Beth is 14 her aunt takes her to stay at Raven Hall where she becomes friends with Nina, the daughter of the family that lives there. Then they ask her to help them with a game and nothing is the same.
2019. Sadie Langton is a struggling actress offered a lucrative gig to pretend to be a guest for a weekend party. Even with the fire damage from years before, Raven Hall is even grander than she imagined. But the longer Sadie is there, and as the other glamorous guests show up, she begins to understand that something is off and the unseen host is playing games with everyone involved.
For Fans Of: Mystery, Thriller

You Have A Match

by Emma Lord
bookshop.org // Kindle // Audiobook
Abby knows who she is but her friend Leo needs a little nudge so she signs up for a DNA service. Things with Leo haven’t been the same since that embarrassing incident.
Turns out she has an older sister, Instagram star Savannah Tully. To find a way to meet her, and find out why her parents gave Savannah up, Abby is off to summer camp. Savannah is a strict rule-follower, Leo is the camp co-chef, and Abby’s feelings are about to be put on blast.
For Fans Of: Tweet Cute, YA Fiction

by Ellery Lloyd
bookshop.org // Kindle // Audiobook
To her millions of followers Emmy Jackson is the honest “Instamum”. Her husband knows that she’s brilliant, and chillingly creative, at monetizing every moment of their lives. As her growing success starts to skew her moral compass, a cracking marriage and a dangerously obsessive fan make her vulnerable to the danger circling closer and closer to her family.
For Fans Of: Suspense, Social Media Thriller

The Ruthless Lady’s Guide to Wizardry

by C.M. Waggoner
bookshop.org // Kindle // Audiobook
Dellaria is a hard-drinking thief who manages to talk her way into a high-paying bodyguard job after seeing an ad. Protecting a rich young lady should be easy but after a series of attacks Delly realizes the danger, and the assassins, are very real. Falling for one of the other guards isn’t part of the plan, and all of the women must work together to fight a magical foe with friends in all the high places.
For Fans Of: LGBTQ, Fantasy

My Rating: ⭐⭐⭐
bookshop.org // Kindle // Audiobook
The girls of the elite boarding school St John The Divine are fierce, loyal, and cutting in the way teenage girls are. Josephine hasn’t spoken to another Divine in 15 years, ever since the school shut down in disgrace. Yet she can’t escape the pull of going back to remember those final weeks. To remember the forgotten girls of her past, her own teenage identity, and the final weeks before the violent secret at the heart of the school’s scandal.
For Fans Of: The Girls, Normal People

by Angie Hockman
bookshop.org // Kindle // Audiobook
Henley is struggling to juggle everything between taking MBA classes at night and her marketing manager job during the day. But when she’s up for promotion it feels like it’s all been worth it. Except remote social media manager Graeme is also up for the job, and their email battles are office legends. The last task is drafting up a proposal for Galapagos bookings complete with a trip. When Henley and Graeme finally meet in person, stuck on a cruise ship, will it be loathing or liking, and who will end up with the dream job.
For Fans Of: The Hating Game, The Unhoneymooners

by Lisa Gardner
bookshop.org // Kindle // Audiobook
Frankie may have more regrets than belongings, but she spends her life looking for missing people that the world has given up on. A new case brings her to Boston searching for a Haitian teenager who vanished from her high school. A rough neighborhood, a reluctant Boston PD, and a weary family find Frankie alone asking questions that someone doesn’t want answered. Discovering the truth might mean she’s next.
For Fans Of: Thriller, Karin Slaughter

Everybody Has a Podcast (Except You): A How-to Guide from the First Family of Podcasting

by Justin McElroy, Travis McElroy, Griffin McElroy
bookshop.org // Kindle // Audiobook
Justin, Travis, and Griffin McElroy took over the podcast scene years ago. What started as being advice-giving brothers producing their own show has turned into a highly successful business. They talk about their journey, the mistakes they made so you don’t have to, and everything you never knew you needed to make your own podcast. All with their own special brand of humor.
For Fans Of: Non-Fiction, The McElroy Brothers

by Rachel Lynn Solomon
bookshop.org // Kindle // Audiobook
Shay has been working as a producer at her Seattle radio station for years but now she can’t stop clashing with newbie Dominic who’s fresh off a Master’s and convinced he knows everything. After Shay proposes a new show for the struggling station, The Ex Talk, where exes will give relationship advice, their boss decided it sounds perfect for Shay and Dominic to do together. They’re not thrilled with lying to to listeners but the podcast takes off, and so does the deception.
For Fans Of: The Hating Game, You Deserve Each Other

by Eliza Jane Brazier
bookshop.org // Kindle // Audiobook
Sera loves true crime podcasts. They make her feel empowered and prepared. When her favorite host, Rachel, goes missing she decides it’s her turn to try. Sera follows the clues to Rachel’s hometown, convinced of making her proud. But an isolated ranch outside the city where women have gone missing before has Sera on uncertain ground and growing feeling that Rachel won’t be the last.
For Fans Of: True Crime, Suspense

We Could Be Heroes

by Mike Chen
bookshop.org // Kindle // Audiobook
Jamie woke up with no memories of his own, but the ability to read and erase other peoples.
Zoe has no memory of her past either and is currently using her speed to deliver fast food.
When they meet at a memory-loss support group a friendship begins as they try to help each other uncover their pasts, only to learn that much more is at stake from an ongoing threat.
For Fans Of: Superheroes, Sci-Fi

by Susan Lewis
bookshop.org // Kindle // Audiobook
Archie Colbrook is in prison, writing letters to the person he didn’t mean to hurt. Claudia Winters is trying to start anew with her family after fleeing an abusive relationship. Their lives are linked by one act of violence; left wondering if forgiveness is the way forward, and if family enough.
For Fans Of: Lisa Scottoline, Diane Chamberlain

Be sure to check out next months February 2021 New Book Releases as well! 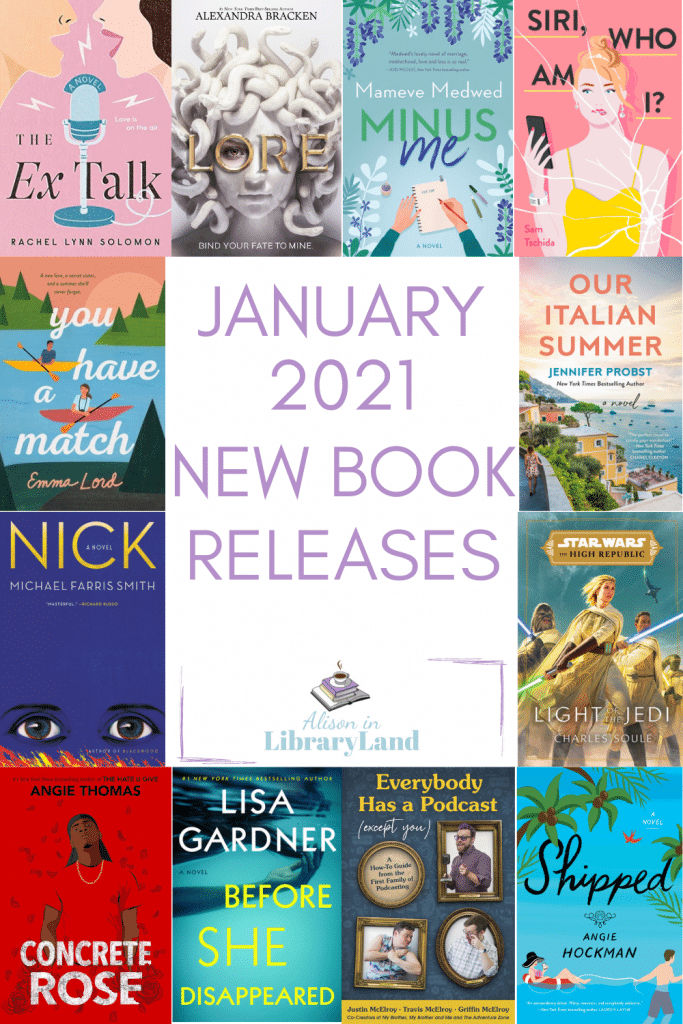 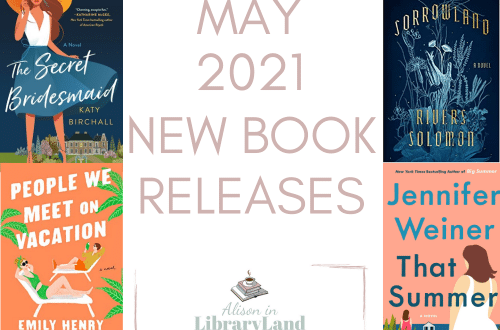 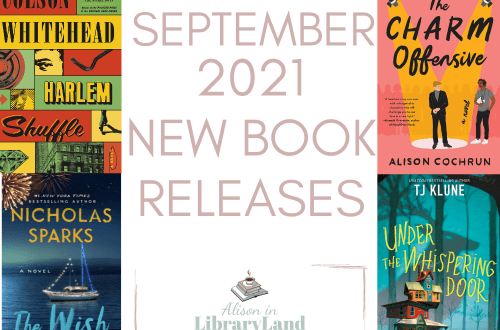 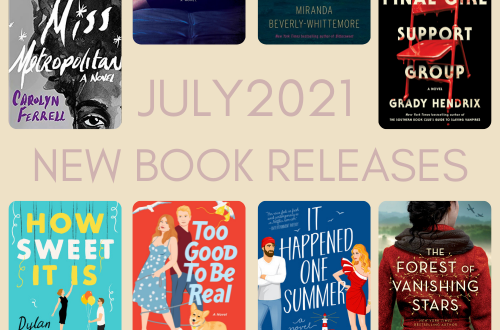