Magical realism is a style that has been getting a lot of notice lately, both in books and on screen, so it’s not surprising to see this Nightbitch adaptation moving along quickly. The movie, based on the debut novel by Rachel Yoder, takes a dive into how motherhood affects women. Blending horror, feminism, and the life-changing experience of having a child this book resonated with many women.
It’s popularity and source of many discussions all lead to a story that should translate well to an audience that will want to see it on screen. Having a six-time Oscar nominee set to star will always give a project a big boost as well.
This page was updated: 7/31/22

One day, the mother was a mother but then, one night, she was quite suddenly something else…
At home full-time with her two-year-old son, an artist finds she is struggling. She is lonely and exhausted. She had imagined – what was it she had imagined? Her husband, always travelling for his work, calls her from faraway hotel rooms. One more toddler bedtime, and she fears she might lose her mind.
Instead, quite suddenly, she starts gaining things, surprising things that happen one night when her child will not sleep. Sharper canines. Strange new patches of hair. New appetites, new instincts. And from deep within herself, a new voice…

The project is currently in pre-production with the script complete and filming expected to begin by the end of the year.

The book was first published in July 2021 and received positive reviews. The next month in August the Nightbitch adaptation was announced by Annapurna Pictures with Amy Adams set to star.
In May 2022 it was announced that Searchlight Pictures had joined on and that the film would be released on Hulu. It is expected to begin filming in Fall 2022.

Annapurna Pictures and Searchlight Pictures currently have the production rights.

Marielle Heller is attached to screenwrite and direct.
Amy Adams is currently signed on for the lead role.

It is expected to film in the Los Angeles area in Fall 2022.

Because this project is still in the pre-production stage there is no current estimated release. 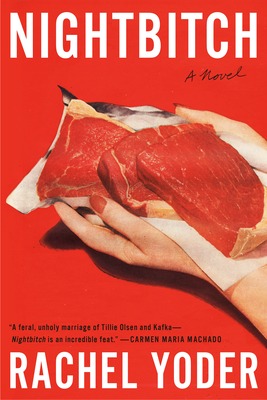 This is the author’s only full length novel, so there are no other works to be adapted.

Nightbitch Adaptation: Everything We Know So Far

Hi there! I’m Alison in Libraryland, and I’ll be here for all your book related needs. Many of you know me as the girl with the book recommendations. Don’t be shy! Ask me! If you’re looking for a good book or movie adaptation, let me help you find it. I’ll be here for all your literary needs. This is a book blog run on an obsession for shiny new books, worn-through old classics, and all attempts at moving those stories to the screen. just like this Nightbitch adaptation! The Selection Adaptation: Everything We Know So Far About The Exciting Project