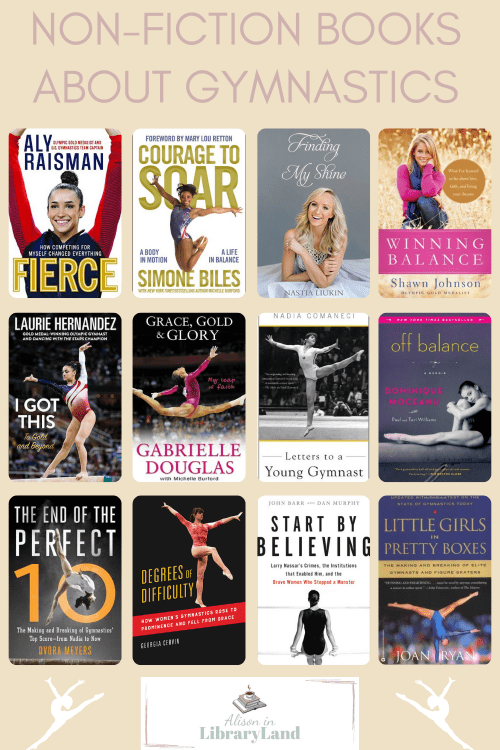 Every four years gymnastics takes center stage at the Olympics. It’s one the most anticipated and watched sports every time the games come around. The athletes become some of the biggest names and stars to come out of the games and their lives are changed forever.

There are plenty of memoirs and biographies from these athletes. Telling their stories of how they became one of the chosen few. But the sport finds itself marred in controversy with regularity. There is no shortage of books diving in to the painful stories that need to be told about how the young girls trying to achieve these Olympic dreams have been let down time and time again.

Courage to Soar: A Body in Motion, A Life in Balance

by Simone Biles, Michelle Burford
bookshop.org // Amazon // Audiobook
“Simone Biles’ entrance into the world of gymnastics may have started on a field trip in her hometown of Spring, Texas, but her talent, along with drive to succeed no matter the obstacle, are what brought her to the national spotlight during the Olympic Games and have catapulted her ever since—including 25 World Championship medals. But there is more to Simone than her accomplishments.”

by Nastia Liukin
bookshop.org // Amazon
“Nastia Liukin is an Olympic gymnastics all-around gold medalist, but the road to her success was not an easy one. In Finding My Shine, she shares not only her personal journey of success, but also her biggest challenges. Including her career ending fall during the 2012 Olympic Trials that she now says was the defining moment of her life. Throughout this book, she delivers her motivational tips toward reaching any goal, overcoming obstacles, and learning how to pick yourself up after the inevitable falls you will have in life.”

Fierce: How Competing for Myself Changed Everything

by Aly Raisman
bookshop.org // Amazon // Audiobook
“Aly Raisman first stepped onto a gymnastics mat as a toddler in a “mommy & me” gymnastics class. No one could have predicted then that sixteen years later, she’d be standing on an Olympic podium, having achieved her dreams. In her own words, Aly shows what it takes to be a champion on and off the floor. Taking readers on a behind-the-scenes journey before, during, and after her remarkable achievements in two Olympic Games. Through her highest highs, lowest lows, and all the moments in between.”

I Got This: To Gold and Beyond

by Laurie Hernandez
bookshop.org // Amazon // Audiobook
“At sixteen years old, Laurie Hernandez has already made many of her dreams come true. A Latina Jersey girl, Laurie saw her life take a dramatic turn last summer when she was chosen to be a part of the 2016 US Olympic gymnastics team. Poignant and funny, Laurie’s story is about growing up with the dream of becoming an Olympian. Including what it took to win gold. She talks about her loving family, her rigorous training, her intense sacrifices, and her amazing triumphs.”

Winning Balance: What I’ve Learned So Far about Love, Faith, and Living Your Dreams

by Shawn Johnson
bookshop.org // Amazon // Audiobook
“American gymnast Shawn Johnson is a four-time Olympic gold and silver medalist; a national- and world-champion athlete. Yet Shawn is no stranger to hard work and adversity. Her loss of the major gymnastics prize everyone expected her to win in Beijing, the all-around Olympic gold medal, was the loss of a dream she’d worked for since childhood. And later, she suffered a staggering injury in a skiing accident that forced her life to a halt and made her rethink what was really important. She wasn’t sure who she was anymore. She wasn’t sure what her goals were. Could she find the right kind of success in life—the kind that doesn’t involve medals or trophies, but peace, love, and lasting joy?”

Grace, Gold, and Glory My Leap of Faith

by Gabrielle Douglas, Michelle Burford
bookshop.org // Amazon // Audiobook
“In the 2012 London Olympics, US gymnast Gabrielle Douglas stole hearts and flew high as the All-Around Gold Medal winner and the brightest star of the US gold-medal-winning women’s gymnastics team. In this personal autobiography she tells her story of faith, perseverance, and determination”

Off Balance: A Memoir

by Dominique Moceanu
bookshop.org // Amazon // Audiobook
“Olympic gold medalist Dominique Moceanu reveals the dark underbelly of Olympic gymnastics, the true price of success…and the shocking secret about her past and her family that she only learned years later. Medals, murder plots, drugs, and daring escapes aside (all of which figure into Moceanu’s incredible journey), the most unique aspect of her life is the family secret that Moceanu discovers, opening a new and unexpected chapter in her adult life.”

It’s Not About Perfect: Competing for My Country and Fighting for My Life

by Shannon Miller, Danny Peary
bookshop.org // Amazon // Audiobook
“When she retired at age 19, Shannon Miller did so as one of the most recognizable gymnasts in the country. The winner of seven Olympic medals and the most decorated gymnast, male or female, in U.S. history, Shannon tells a story of surviving and thriving. A shy, rambunctious girl raised in Oklahoma, Shannon fell in love with gymnastics at a young age and fought her way to the top. Equally intense, heroic and gratifying is the story of her brutal but successful battle with ovarian cancer, a disease from which fewer than fifty percent survive. Relying on her faith and hard-learned perseverance, Shannon battled through surgery and major chemotherapy to emerge on the other side with a miracle baby girl.”

Letters to a Young Gymnast (Art of Mentoring)

by Nadia Comaneci
bookshop.org // Amazon
“With grit and determination, Nadia Comaneci ushered in a new era for women’s sports, one where young girls could vault into the arena of superstardom. With inspiring and dramatic stories from her own experience, she tells us how the young girl that Bela Karolyi discovered in a Romanian elementary school found the inner strength to become a world-class athlete at such a young age. This collection of Nadia’s memories, anecdotes, and advice grants unique insights into the mind of a top competitor. ”

The End of the Perfect 10: The Making and Breaking of Gymnastics’ Top Score —from Nadia to Now

by Dvora Meyers
bookshop.org // Amazon // Audiobook
“For years, gymnastics was scored on a 10.0 scale. During this era, more than 100 “perfect” scores were awarded in major international competitions. But when the 10.0 scoring system caused major judging controversies at the 2004 Olympics, international elite gymnastics made the switch to the open-ended scoring system it uses today. Which values both difficulty and technical execution, making perfect scores a thing of the past—and forever altering the sport in the process.”

Degrees of Difficulty: How Women’s Gymnastics Rose to Prominence and Fell from Grace

by Georgia Cervin
bookshop.org // Amazon
“Electrifying athletes like Olga Korbut and Nadia Comăneci helped make women’s artistic gymnastics one of the most popular events in the Olympic Games. But the transition of gymnastics from a women’s sport to a girl’s sport in the 1970s also laid the foundation for a system of emotional, physical, and sexual abuse of gymnasts around the world. Georgia Cervin offers a unique history of women’s gymnastics, examining how the high-stakes diplomatic rivalry of the Cold War created a breeding ground for exploitation.”

Life Is Short, Don’t Wait to Dance: Advice and Inspiration from the UCLA Athletics Hall of Fame Coach of 7 NCAA Championship Teams

by Valorie Kondos Field
bookshop.org // Amazon // Audiobook
“Former professional ballerina Valorie Kondos Field–or Miss Val, as she’s affectionately known–has never tumbled, flipped, or even played any type of organized sports. And yet she has been able to craft a legendary coaching career through curiosity, creativity, attention to detail, and unwavering care for the overall well-being of her athletes. For Miss Val, it’s not about winning and losing, it’s about choreographing your life and owning the choices you make.”

by Joan Ryan
bookshop.org // Amazon // Audiobook
“A sports reporter investigates the training of girls as professional gymnasts and figure skaters. Arguing that the pressure to succeed and to look beautiful results in mental and physical harm, from eating disorders to psychological trauma.”

Start by Believing: Larry Nassar’s Crimes, the Institutions that Enabled Him, and the Brave Women Who Stopped a Monster

by John Barr, Dan Murphy
bookshop.org // Amazon // Audiobook
“The definitive, devastating account of the largest sex abuse scandal in American sports history. With new details and insights into the institutional failures, as well as the bravery that brought it to light. Through never-before-released interviews and documents they deconstruct the epic institutional failures and individuals who enabled Larry Nassar. When warnings were raised, self-serving leaders chose to protect their organizations’ reputations over the well-being of young people.”

What Is a Girl Worth?: My Story of Breaking the Silence and Exposing the Truth about Larry Nassar and USA Gymnastics

by Rachael Denhollander
bookshop.org // Amazon // Audiobook
“Rachael Denhollander’s voice was heard around the world when she spoke out to end the most shocking US gymnastics scandal in history. The first victim to publicly accuse Larry Nassar, the former USA Gymnastics team doctor who sexually abused hundreds of young athletes, Rachael now reveals her full story for the first time. How did Nassar get away with it for so long? How did Rachael and the other survivors finally stop him and bring him to justice? And how can we protect the vulnerable in our own families, churches, and communities?”

The Girls: An All-American Town, a Predatory Doctor, and the Untold Story of the Gymnasts Who Brought Him Down

by Abigail Pesta
bookshop.org // Amazon // Audiobook
“We think of Larry Nassar as the despicable sexual predator of Olympic gymnasts — but there is an astonishing, untold story. For decades, in a small-town gym in Michigan, he honed his manipulations on generations of aspiring gymnasts. Kids from the neighborhood. Girls with hopes of a college scholarship. Athletes and parents with a dream. These brave women for the first time describe Nassar’s increasingly bold predations through the years. Recounting their unheeded warning calls and demonstrating their resiliency in the face of a nightmare.”

Chalked Up: My Life in Elite Gymnastics

by Jennifer Sey
bookshop.org // Amazon // Audiobook
“Dreams of becoming the next Nadia Comaneci led Jennifer Sey to become a gymnast at the age of six. Her early success and love of the sport propelled her and her family to great sacrifice so that she could become a National Team member and one of America’s elite gymnasts by age 11. But as she set her sights higher, Jennifer began to change, setting her mental and physical health aside in the name of winning. The coaching culture of extreme cruelty drove Jennifer to self-harming behaviors. Extreme injuries, an eating disorder, and depression and the adults in her life who were supposed to protect her failed to intervene, swept up in the dream of an Olympic berth.” 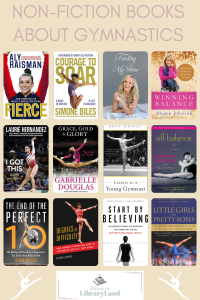