The upcoming Razorblade Tears adaptation, based on the best selling novel by S.A. Cosby, is sure to be a thrilling feature film. While at it’s core the novel is a crime fiction, the characters dive into a story of self-reflection and growth that is viscerally grounded in being simply desperate antiheroes. A different kind of character than most people find themselves rooting for.

Ike Randolph has been out of jail for fifteen years, with not so much as a speeding ticket in all that time. But a Black man with cops at the door knows to be afraid. The last thing he expects to hear is that his son Isiah has been murdered, along with Isiah’s white husband, Derek. Ike had never fully accepted his son but is devastated by his loss.
Derek’s father Buddy Lee was almost as ashamed of Derek for being gay as Derek was ashamed his father was a criminal. Buddy Lee still has contacts in the underworld, though, and he wants to know who killed his boy.

Ike and Buddy Lee, two ex-cons with little else in common other than a criminal past and a love for their dead sons, band together in their desperate desire for revenge. In their quest to do better for their sons in death than they did in life, hardened men Ike and Buddy Lee will confront their own prejudices about their sons and each other, as they rain down vengeance upon those who hurt their boys.

In the early stages of development, with a screenwriter, as of Summer 2022.

The book was first published in July 2021, but the bidding war for the Razorblade Tears adaptation started much earlier. Paramount was announced as the winner in January 2021, seven months before the book would be released.
In August 2021 a screenwriter was named to the project.

Sherman Payne (Charm City Kings) has been named the screenwriter. There has been no casting or director announcements made yet.

With this project still being in the very early stages of development there are no filming locations yet.

Because this project is the very early stages of development there is currently no estimated release. 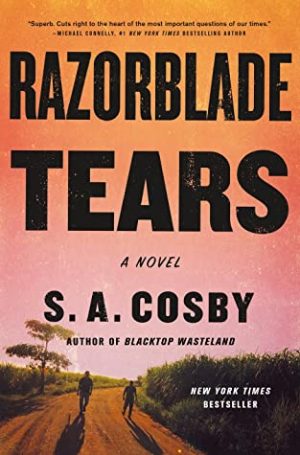 ‘Blacktop Wasteland’, also by S.A. Cosby, is in the very early stages of adaptation as well.

Razorblade Tears Adaptation: Everything We Know So Far About The Thrilling New Feature

Hi there! I’m Alison in Libraryland, and I’ll be here for all your book related needs. Many of you know me as the girl with the book recommendations. Don’t be shy! Ask me! If you’re looking for a good book or movie adaptation, let me help you find it. I’ll be here for all your literary needs. This is a book blog run on an obsession for shiny new books, worn-through old classics, and all attempts at moving those stories to the screen, just like this Razorblade Tears adaptation!