Stephen King might be one of the most adapted modern day authors, and this Salem’s Lot adaptation wants to push the horror he’s known for. The screenwriter Gary Dauberman has given many interviews about wanting this movie version to make vampires frightening again. This is the same screenwriter who adapted the recent movie version of IT so I think he can handle that!
If you think you missed something, don’t worry! The release date was changed from Fall 2022 to April 2023, and has now been indefinitely postponed.

About The Book: Ben Mears has returned to Jerusalem’s Lot in hopes that exploring the history of the Marsten House, an old mansion long the subject of rumor and speculation, will help him cast out his personal devils and provide inspiration for his new book. But when two young boys venture into the woods, and only one returns alive, Mears begins to realize that something sinister is at work—in fact, his hometown is under siege from forces of darkness far beyond his imagination. And only he, with a small group of allies, can hope to contain the evil that is growing within the borders of this small New England town.

Salem’s Lot Adaptation Timeline:
In April 2019 New Line Cinema announced the new Salem’s Lot adaptation with the screenwriter who had just finished another Stephen King project, the IT movies. He was also announced as the director a year later in Spring 2020. After delays in production because of the Covid pandemic, Lewis Pullman was announced as the lead in August 2021. Filming began the next month in various locations around Massachusetts. Re-shots were done in early 2022. While it was first announced that the movie would be released September 2022, in July it was changed to April 21st, 2023 citing “COVID-related delays in the post-production realm”.
In late August 2022 the film was taken off the release schedule and indefinitely postponed.

Estimated Release: Indefinitely postponed (after being delayed from April 2023) 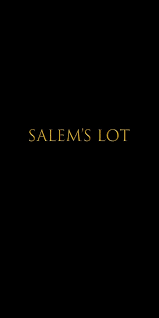 Salem’s Lot Adaptation: Everything We Know So Far

Hi there! I’m Alison in Libraryland, and I’ll be here for all your book related needs. Many of you know me as the girl with the book recommendations. Don’t be shy! Ask me! If you’re looking for a good book or movie adaptation, let me help you find it. I’ll be here for all your literary needs. This is a book blog run on an obsession for shiny new books, worn-through old classics, and all attempts at moving those stories to the screen, like this Salem’s Lot adaptation😉