Having such a big name atttached to The Cipher adaptation, so soon after the book was first published, led to high hopes for this Netflix movie. The book turning into a series is another great sign of a project that should have a strong future, but there have been very little updates so the real status of this project is not well known.
As someone who’s been reading the series as it comes out, I hope we get more news soon!

FBI Special Agent Nina Guerrera escaped a serial killer’s trap at sixteen. Years later, when she’s jumped in a Virginia park, a video of the attack goes viral. Legions of new fans are not the only ones impressed with her fighting skills.
The man who abducted her eleven years ago is watching. Determined to reclaim his lost prize, he commits a grisly murder designed to pull her into the investigation…but his games are just beginning. And he’s using the internet to invite the public to play along.

His coded riddles may have made him a depraved social media superstar—an enigmatic cyber-ghost dubbed “the Cipher”—but to Nina he’s a monster who preys on the vulnerable. Partnered with the FBI’s preeminent mind hunter, Dr. Jeffrey Wade, who is haunted by his own past, Nina tracks the predator across the country. Clue by clue, victim by victim, Nina races to stop a deadly killer while the world watches.

The book was first published in November 2020. The next month in December it was announced that Netflix has optioned the film rights with Jennifer Lopez attached to star and co-produce. In March 2021, Jason Smilovic And Todd Katzberg were announced as the screenwriters.
A sequel was published in August 2021, and a third book in the series released in June 2022.

Netflix has the production and distribution film rights.

Jennifer Lopez is currently set to star in the lead role. 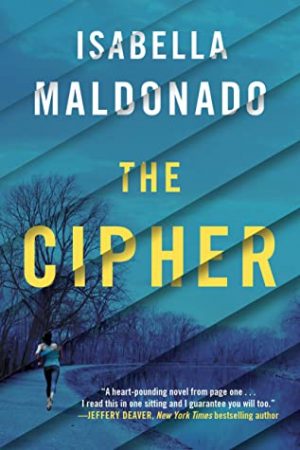 This is currently the only book & series adaptation for Isabella Maldonado in the works.

Hi there! I’m Alison in Libraryland, and I’ll be here for all your book related needs. Many of you know me as the girl with the book recommendations. Don’t be shy! Ask me! If you’re looking for a good book or movie adaptation, let me help you find it. I’ll be here for all your literary needs.
This is a book blog run on an obsession for shiny new books, worn-through old classics, and all attempts at moving those stories to the screen, just like this The Cipher adaptation! Firekeeper’s Daughter Adaptation: Everything We Know About The Exciting New Netflix Project Grendel Adaptation: Everything We Know So Far About The Exciting New Series