The Color Purple adaptation is another take on a striking and powerful story that has rightfully been named on numerous lists of the most influential novels. Alice Walker was the first black woman to ever win the Pulitzer Prize for Fiction because of this book. And the first movie adaptation was a critical success that launched many black actors into the top of Hollywood circles.
But this remake is different too, because it’s coming from an adaptation of the stage musical that was made based off the book. In fact some of the actors that were part of the Tony nominated play will be reprising their roles for the film.
This book is also regularly targeted for “banning” from libraries because of it’s subject matter, making this remake an important part of keeping the story accessible to the public as it heads to theater screens.
This page was updated: 7/31/22

Set in the deep American South between the wars, The Color Purple is the classic tale of Celie, a young black girl born into poverty and segregation. Raped repeatedly by the man she calls ‘father’, she has two children taken away from her, is separated from her beloved sister Nettie and is trapped into an ugly marriage. But then she meets the glamorous Shug Avery, singer and magic-maker – a woman who has taken charge of her own destiny. Gradually Celie discovers the power and joy of her own spirit, freeing her from her past and reuniting her with those she loves.

The book was first released in 1982 and won the Pulitzer Prize. It was adapted to screen shortly after in 1985.
In 2005 a musical adaptation was taken to the stage, where it went to Broadway and had eleven Tony nominations.
It was announced in November 2018 that the same companies who had produced the original adaptation were developing a new film adaptation of the musical. In August 2020 the director and screenwriter were signed on. Pre-production also began and a release date for December 2023 was announced.
The first casting announcements came in August 2021 with Corey Hawkins and H.E.R. The rest of the cast was announced in Spring 2022.
Filming began March 2022 and wrapped in July. The project then moved in post-production.

Warner Bros. Pictures and Amblin Entertainment own the right and are producing the remake. This is the same partnership that produced the original 1985 adaptation. Steven Spielberg and Oprah Winfrey are signed on as exectuive producers. Alice Walker has also joined to be a producer.

The project was filmed in various cities in Georgia including Atlanta, Macon, and Jekyll Island. 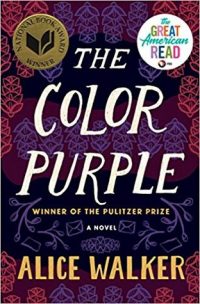 The Color Purple adaptation is currently scheduled for release on December 20, 2023.

You can find this book in 2023 Books To Screen Adaptations.

There are no other adaptations of Alice Walker’s work.

The Color Purple Adaptation: Everything We Know So Far

Hi there! I’m Alison in Libraryland, and I’ll be here for all your book related needs. Many of you know me as the girl with the book recommendations. Don’t be shy! Ask me! If you’re looking for a good book or movie adaptation, let me help you find it. I’ll be here for all your literary needs. This is a book blog run on an obsession for shiny new books, worn-through old classics, and all attempts at moving those stories to the screen, just like this The Color Purple adaptation!