Mixing historical fiction with magical realism just sounds like a recipe for the screen, so it’s not surprising a The Many Daughters of Afong Moy adaptation was announced just days after the book was release.
The book received national attention right from the start being the August 2022 pick for the Read With Jenna Book Club, discussed on the Today show.

Dorothy Moy breaks her own heart for a living.

As Washington’s former poet laureate, that’s how she describes channeling her dissociative episodes and mental health struggles into her art. But when her five-year-old daughter exhibits similar behavior and begins remembering things from the lives of their ancestors, Dorothy believes the past has truly come to haunt her.
Fearing that her child is predestined to endure the same debilitating depression that has marked her own life, Dorothy seeks radical help.

Through an experimental treatment designed to mitigate inherited trauma, Dorothy intimately connects with past generations of women in her family:
Faye Moy, a nurse in China serving with the Flying Tigers; Zoe Moy, a student in England at a famous school with no rules; Lai King Moy, a girl quarantined in San Francisco during a plague epidemic; Greta Moy, a tech executive with a unique dating app; and Afong Moy, the first Chinese woman to set foot in America.

As painful recollections affect her present life, Dorothy discovers that trauma isn’t the only thing she’s inherited. A stranger is searching for her in each time period. A stranger who’s loved her through all of her genetic memories. Dorothy endeavors to break the cycle of pain and abandonment, to finally find peace for her daughter, and gain the love that has long been waiting, knowing she may pay the ultimate price.

The rights were optioned in August 2022, so it’s in the very beginning stages of development.

The Many Daughters of Afong Moy Adaptation Timeline:

The book was first published in early August 2022, and less than two weeks later the The Many Daughters of Afong Moy adaptation was announced by Jenna Bush Hager on the Today show. It had been her Read With Jenna Book Club pick for the month.

Jenna Bush Hager and her UCP-based banner, which has a first-look deal with Universal Studio Group, acquired the rights for a series.

There has not been a director or screenwriter been named to the movie. There have also been no casting announcements.

Will this project still in very early development there are no filming locations yet.

Because this project is in the very early stages of development there is no current estimated release. 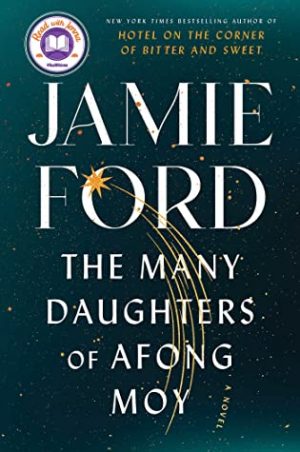 ‘Hotel on the Corner of Bitter and Sweet’ has had both it’s film and musical rights optioned but there has been no public development for either project. No other Jamie Ford novels are in the works for adaptation.

Hi there! I’m Alison in Libraryland, and I’ll be here for all your book related needs. Many of you know me as the girl with the book recommendations. Don’t be shy! Ask me! If you’re looking for a good book or movie adaptation, let me help you find it. I’ll be here for all your literary needs. This is a book blog run on an obsession for shiny new books, worn-through old classics, and all attempts at moving those stories to the screen, just like this The Many Daughters of Afong Moy Adaptation!