The Uglies adaptation, based on the book by Scott Westerfeld, has been long anticipated. But after a few false starts the recent Netflix project finally making it happen. I have a soft spot for this series because I read it in high school as it was being released. I’ve been waiting for this adaptation a long time! It had a resurgence of popularity thanks to the BookTok/BookTube/Bookstagram fans so now this new movie has a lot of people waiting for it, more than just me.
While the YA trends have gone towards the fantasy genre there are a few upcoming projects that might take us back to the YA dystopia era.

About The Book: Tally is about to turn sixteen, and she can’t wait. In just a few weeks she’ll have the operation that will turn her from a repellent ugly into a stunning pretty. And as a pretty, she’ll be catapulted into a high-tech paradise where her only job is to have fun.

But Tally’s new friend Shay isn’t sure she wants to become a pretty. When Shay runs away, Tally learns about a whole new side of the pretty world—and it isn’t very pretty. The authorities offer Tally a choice: find her friend and turn her in, or never turn pretty at all. Tally’s choice will change her world forever.

Uglies Adaptation Timeline:
In February 2005 the first book was published. The rights were purchased the next year with a movie planned. But the project did not move forward and got stuck in ‘development hell’ from 2007 to 2020.
Then in September 2020 Netflix announced it had acquired the rights and that Joey King would be cast in the lead role. Filming began in October 2021 and went through December. The movie entered post-production right before the holidays.
Uglies is currently not on Netflix’ public release schedule but it is expected in Fall/Winter 2022. 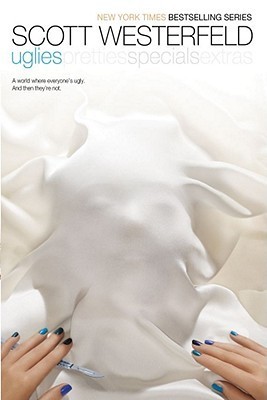 Uglies Adaptation: Everything We Know So Far

Hi there! I’m Alison in Libraryland, and I’ll be here for all your book related needs. Many of you know me as the girl with the book recommendations. Don’t be shy! Ask me! If you’re looking for a good book or movie adaptation, let me help you find it. I’ll be here for all your literary needs. This is a book blog run on an obsession for shiny new books, worn-through old classics, and all attempts at moving those stories to the screen, including this Uglies adaptation!