With the book selling over one million copies worldwide, there’s definitely an audience waiting for the We Were the Lucky Ones adaptation. Georgia Hunter’s novel was inspired by finding out as a teenage that she came from a family of holocaust survivors, and a quest to know more about her history leading to the uncovering of many true stories. The care and depth behind the story led to a New York Times best seller and a source for many conversations between readers.

About The Book:
It is the spring of 1939 and three generations of the Kurc family are doing their best to live normal lives, even as the shadow of war grows closer. The talk around the family Seder table is of new babies and budding romance, not of the increasing hardships threatening Jews in their hometown of Radom, Poland. But soon the horrors overtaking Europe will become inescapable and the Kurcs will be flung to the far corners of the world, each desperately trying to navigate his or her own path to safety.

As one sibling is forced into exile, another attempts to flee the continent, while others struggle to escape certain death, either by working grueling hours on empty stomachs in the factories of the ghetto or by hiding as gentiles in plain sight. Driven by an unwavering will to survive and by the fear that they may never see one another again, the Kurcs must rely on hope, ingenuity, and inner strength to persevere.

Current Production Status:
The project is currently in pre-production with casting announcements ongoing.

We Were the Lucky Ones Adaptation Timeline:
The book was first published in 2017 and became a best seller. Thomas Kail, who is friends with the author, acquired the rights for a We Were The Lucky Ones adaptation the following year in 2018.
In April 2022 it was announced that Hulu had ordered a full eight episode mini-series with Joey King set to star. Logan Lerman was added to the cast a few months later in September. More casting announcements were made throughout the fall leading to speculation that filming would be starting soon.

Who Owns The Rights:
20th Television is producing the series. Hulu joined on for both production and distribution rights.

Who Is Attached:
Joey King and Logan Lerman are set to star and Thomas Kail will direct and executive produce.

Filming Locations:
There is currently no production information which means there are no filming locations. 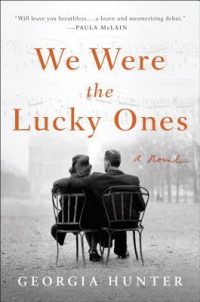 There is currently no production information which means there is no estimated release.

Other Adaptations From This Author:
We Were The Lucky Ones is currently the authors only novel.

We Were the Lucky Ones Adaptation: Everything We Know So Far

Hi there! I’m Alison in Libraryland, and I’ll be here for all your book related needs. Many of you know me as the girl with the book recommendations. Don’t be shy! Ask me! If you’re looking for a good book or movie adaptation, let me help you find it. I’ll be here for all your literary needs. This is a book blog run on an obsession for shiny new books, worn-through old classics, and all attempts at moving those stories to the screen, just like this We Were the Lucky Ones adaptation!